Finland. At the turn of the year, Finland was the only Nordic country to enter the Economic and Monetary Union (EMU). Among the eleven countries that shaped the euro area, Finland was among those who best met the participation requirements. But even though the Finnish currency was now strong after many crisis years, unemployment was still high. Despite some decline in 1998, it was estimated at 10% during the year. Growth slowed slightly, but was nevertheless estimated to be 3.8%.

In the campaign ahead of the parliamentary elections on March 21, the government was accused by opposition leader Esko Aho, Center Party, of going too far in privatization tendencies. Aho said that there was no counterbalance to market forces, that the cuts created increased social and regional injustices. The Center Party went from 44 to 48 seats in the election, while Prime Minister Paavo Lipponen and the Finnish Social Democratic Party lost 12 seats and stayed at 51. A fierce battle during an exciting election night ended with the Social Democrats being half a percentage point larger than the Center Party, 22.9 against 22.4%. As a result, Lipponen’s condition was met that his party would have to be the biggest if he were to re-form government.

For the first time in Finland’s history, therefore, the same party constellation remained seated after an election. Visit Countryaah official website to get information about the capital city of Finland. Lipponen continued with its rainbow coalition consisting of five parties from right to left. The Social Democrats’ largest coalition partner was the National Assembly Party, which in the elections went from 39 to 46 seats. The Popular Party’s popular leader, Finance Minister Sauli Niinistö, received by far the most votes. The Left League lost two seats to 20 and the Swedish People’s Party retained its 11 seats, while the Green League went ahead with two seats to 10. The turnout was record low, 65%. 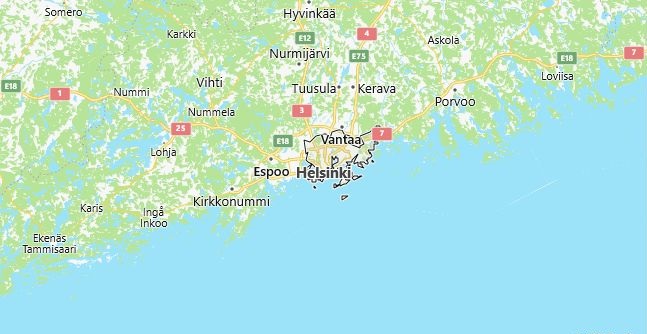 In the June European elections, only 31% of Finns voted. The Assembly Party and the Center Party became the largest with each having their 4 seats. The Social Democrats made a bad choice, ended up just under 18%, lost a mandate and stayed at 3%.

But despite the low voter interest, Finland had gained a reputation as a reliable EU member. During the spring war in Kosovo, internationally experienced President Martti Ahtisaari was appointed EU mediator. He quickly achieved results and got Yugoslav President Slobodan Milošević to agree to NATO’s demands for a bomb stop.

It was therefore with international prestige that Finland took over the EU Presidency on July 1 for six months. The reconstruction of Kosovo, the enlargement of the EU and the development of the “Northern Dimension” were Finnish priorities. Through the northern dimension, Finland wanted, among other things, creating greater understanding in the EU of the security and economic importance of integrating the Russian Federation into regional cooperation.

During the autumn, Finland hosted a number of prominent ministerial meetings, including in October on EU asylum rules and on police cooperation against international crime. Finland’s presidency culminated with the meeting of EU heads of state and government in Helsinki in December.

The campaign for the presidential elections in January 2000 discussed, among other things. the sensitive issue of possible Finnish membership in NATO. Opinion surveys did not show a majority for NATO membership, but 58% said that Finland will join NATO.

The March 2007 parliamentary elections were won by the Center Party with 23.1% of the vote. The National Coalition got 22.3% and Social Democracy 21.4%.

Finland was relatively hard hit by the global economic crisis. In 2009, GDP fell by 7.8%.

Prime Minister Vanhanen resigned in June 2010 and was replaced by his party mate, Mari Kiviniemi.

In April 2011, parliamentary elections were held. The election was a staggering defeat for the Center Party, which lost 16 seats and gained 35, but the National Coalition Party and Social Democracy also declined. The great victor was the Sand Finns, who went 34 seats up to 39. The party went for election on a nationalist program that put long distance between the EU and its crisis programs. The National Coalition Party became the country’s largest for the first time, but the formation of the government took 2 months as the parties wanted to avoid the Sand Finns. In June, the Coalition Party’s Jyrki Katainen could take over as prime minister for a government consisting of his own party, the Social Democracy, the Left Alliance, the Greens, the Swedish People’s Party and the Christian Democrats.

From the beginning, Katainen was a major supporter of the EU and the EU’s rescue of the failed EU countries. However, he was opposed to the EU financial tax proposal, which was considered in November 2012. Although other parties in his coalition government were in favor of the proposal, his opposition was so strong that he threatened to blow up the government and print new elections unless the whole government backed him up.

In January-February 2012, presidential elections were held. Sauli Niinistö of the Coalition Party won the first round of elections by 37.0% against the Green League’s Pekka Haavisto who got 18.8%. In the second election, Niinistö got 62.6%. The long tradition of social democratic governments was thus broken.

In November 2012, the Ombudsman initiated an investigation into Finland’s role in the United States Rendition Program, which involved torture at centers around the world and the transport of prisoners between them. The study report was released in April 2014. There was no tangible evidence of Finland’s participation in the torture program.

As in many other countries, police often use excessive physical force. In May 2012, a 30-year-old man died at a police station after police used a stun gun against him. In August, a stun gun was used against a 14-year-old boy who got his arm leather. An investigation into the assault was subsequently suspended.