Hungary. On March 12, Hungary joined the NATO military alliance together with Poland and the Czech Republic. Almost two weeks later, NATO launched bombing of Yugoslavia to force its army to leave Kosovo. As the only NATO country with a border with Yugoslavia, Hungary was placed in a very sensitive situation. Prime Minister Viktor Orban explained that the country was not prepared to participate in any ground operation led by NATO in Yugoslavia. Nor was it intended to allow such an attack to originate in Hungarian territory. However, NATO’s plan to use Hungarian airspace and its airports was allowed. But according to surveys, a clear majority of Hungarians were against this. There was also widespread concern that the more than 300,000 strong Hungarian minority in the North Yugoslav province of Vojvodina would be hit by NATO bombs. Several of the Hungarians there fled to Hungary in fear of Serbian reprisals following NATO’s attack. Hungary also ended in diplomatic conflict with the Russian Federation after a Russian convoy with humanitarian aid to Serbia was stopped by Hungarian border guards who refused to pass through tankers with oil. For this, Hungary received praise from NATO for showing “absolute loyalty”.

Visit Countryaah official website to get information about the capital city of Hungary. The war also created domestic political problems when the second leader of one of the coalition’s parties declared that it was conceivable that Vojvodina would become an independent state. The other government rushed to dismiss the claim of fear that it might interfere with NATO’s strategy. The opposition, for its part, said that the statement risked provoking attacks on ethnic Hungarians in Vojvodina and other neighboring countries. 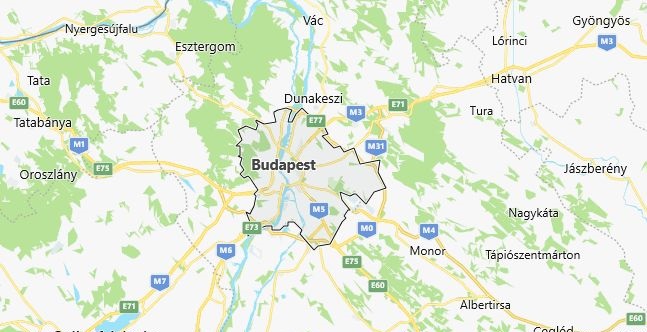 The frosty relations between Hungary and Slovakia thawed somewhat through an agreement in September, when the two countries decided to jointly rebuild a bridge across the Danube border that has been razed since the Second World War.

At the end of the year, the opposition was very critical of the center-right government’s plans to have, on New Year’s Day 2000, reclaim an old royal crown as a symbol of the Hungarian state and move it from a museum to parliament. The Crown has belonged to King Stefan I, Hungary’s national saint. The critics said that the proposal was reminiscent of a “crown cult” that existed during World War II’s Hitler-allied Hungarian regime.

Buʹdapest, capital of Hungary; 1. 8 million residents (2017). Budapest is located on both sides of the Danube River, 30 km south of the Danube Curve at the point where the river cuts through the Hungarian middle mountains.

The western side, Buda, lies on the outskirts of this mountain country, while the eastern side, Pest, is located on a foothill to the Hungarian plain (Danube-Tisza Plateau). Budapest is the country’s political, administrative, industrial and commercial center.

The contrasts between the mountain landscape in the west (Buda) and the large plain in the east (Pest) characterize Budapest’s cityscape. The Buda side is dominated by Gellért Mountain and Slottsberget with the medieval castle, redesigned during the 19th century, which now houses museums and libraries. The Matthias Church, built in 1255–69, was restored in 1874–96 by Frigyes Schulek, who also designed the monumental Fishery Bastion (1900–02). Remains of the old small town remain in the oldest part of the city, Óbuda.

Budapest’s administrative and commercial center is located on the Pests side. The magnificent New Gothic Parliament Building (1885-1904) by Imre Steindl and the Academy of Sciences (1862-65) by Friedrich Stüler are a couple of the city’s major public building monuments. Significant classicist buildings are the National Museum (1837–46) by Mihály Pollák and St. Stephen’s Basilica (begun in 1851) by József Hild and Miklós Ybl and the opera (1875–84) by Ybl. Of the buildings in the national romantic style can be mentioned the Museum of Art Industry (1893–96) and Postsparbanken (1900), both by Ödön Lechner.

The most characteristic of Pestsidan’s cityscape are the massive apartment building areas, predominantly of 19th-century buildings in a uniform style. Since 1989, several large office buildings have been erected along the outer ring. The industrial belt surrounds the city on all sides except to the west.

During the 1950s and 1960s, the severely war-damaged district of Slottsberget became the subject of extensive restoration. several interesting examples of the insertion of new buildings in the old environment.

The two city halves of Buda and Pest are joined by several magnificent bridges, including the Chain Bridge (the oldest), Elizabeth’s Bridge and Margaret Bridge. South of the inner city, a new bridge from the Pestsidan leads to the Technical University’s development area on the Buda side.

An important part of Budapest’s cityscape is also all the bathhouses built over the health-giving hot springs. Some of them have been in use since the Turks’ time, while others were built around the turn of the last century.

The Danube beaches and the castle area are included in the UNESCO World Heritage List.

More than half of Hungary’s industrial production is concentrated in Budapest. The oldest industrial branch, the food industry, is still of great importance. Later, the engineering and textile industries and mainly during the post-war period metal, chemical and petrochemical and electronic industries were developed. During the late 1990s and early 2000s, many Hungarian companies formed joint ventures with foreign partners; this happened within the automotive industry. The city has long been a major tourist city

Budapest was developed during the second half of the 19th century into a major cultural city, partly parallel to Vienna. The city has a lot of theaters, many located in the neighborhood around Avenyn (Andrássy út). The State Opera (Állami Operaház, built in 1875–84 in neo-Renaissance style), together with the Academy of Music (Liszt Ferenc Zeneművészeti Főiskola), marks Budapest’s role as a music city. Other institutions in the music industry are the State Symphony Orchestra, the Hungarian Radio Symphony Orchestra and the Operetta Theater. The main museums are the National Museum (Magyar Nemzeti Múzeum) and the Art Museum. The Historical Museum and the Bartók Archives have rich collections of documents. Budapest is the seat of the Hungarian Academy of Sciences (Magyar Tudományos Akadémia), and the city has two universities (the oldest from 1635), a technical college and a large number of higher education institutions.

In the current urban area, people have been living for millennia. In Roman times a relief troop fort was built and later, 90 AD, a legion fort under the name Aquincum. Around these, civilian suburbs grew up. Aquincum gained the status of a Roman colony in the early 20th century. The Legion Chief’s palace on the Danube beach has been partially excavated, and several blocks of the colony have become an archaeological park. During the migration, Aquincum was destroyed.

Budapest was resurrected as the Magyars conquered the country in the late 800s. The settlements on the site became more important by crossing a river between Western Europe and Kiev here. The names Buda and Pest began to be used in the 1100s. After a Mongol attack in 1241, the medieval Buda was provided with a castle in stone, and the court and the royal administration had their seat in Buda from the 1300s. Plague received city privileges in 1244, and in the late Middle Ages the two cities developed into thriving commercial cities. The Turkish occupation of 1541–1686 meant a decline. Budapest underwent a strong development under the two Habsburg regiments Maria Teresia (1740–80) and Josef  II (1765–90).

The decades around 1850 meant that Budapest was transformed from small town to big city. This was done by B. becoming the railroad connected and industrialized, by the resumption of formal capital functions in 1867 and by officially merging Óbuda, Buda and Pest in 1873. The change is reflected in, above all, planning and construction. Budapest continued to develop during the interwar period, not least as an industrial city. In the end of World War II, severe battles were fought in the city; all the bridges across the Danube were blown up and significant damage was added to the urban development. Damages to buildings also occurred during the 1956 revolt.